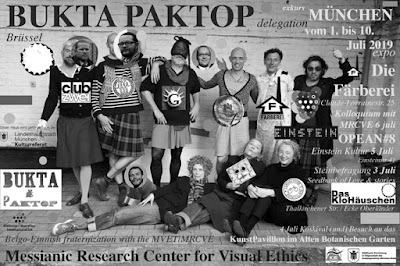 more info to be had
by clicking on the pages
here to the right,
hopefully will be updated regular!

-Buktapaktop will be in Munich, Germany from the 1st to the 10 th of July for a major interactive public interface encounter with the Messianic Research Center for Visual Ethics (MRCVE) with whom we have had dealings in the past but never attempted what might be called a co-production before… Our main base of operations will be “Die Färberei” at Nr. 25, Claude Lorrainestrasse…

During the visit to the Kunstpavillon im Alten Botanischen Garten on the 4th of July in combo picknick (and make-believe streetart* session? ) to then join the procession (beginning at the main train station at 6 p.m.of the Kösival “Behinderung ist Rebellion” parade back towards Laim.. 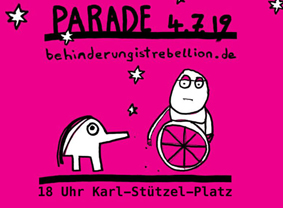 inf act I had already reconnoitered the state of the sculpture where we are to commence the parade: 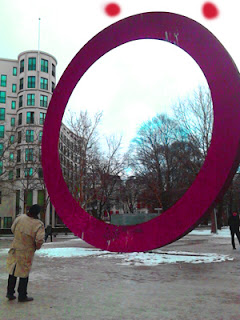 (*still to be discussed with each other and local players: I thought of combining the ‘visit’ to the pavillion with the creation of street-art with local players, but one which we can retrieve and show at The Färberei…based loosely on antics by the SI-related group “SPUR” who showed there in the early 60’s and which has resurfaced in the interest of the younger generation…)

the basic premise of our meeting is to investigate the non-human aspect of the Actor-Network Theory in a hands-on manner...
here i found a rather neat little diagram on the net that sort of gives you a clue (or less) 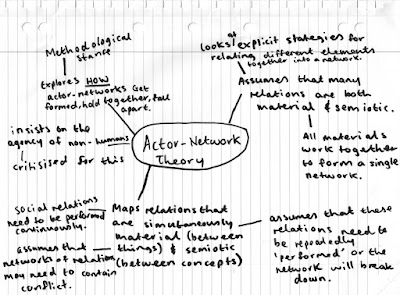 I have been asked (again) to illustrate my basic plotline, concept, brainstorm around the excursion to Munich and the colloquial meeting of Bukta&MRCVE... In fact it was Andrea who proposed the idea after out Opean invitation was received... that’s how we ended up in the Färberei.

Well, it sort of starts in the Pyrenees in the thirties... Nomads and refugees, Spanish civil war, clash of ideological blocks... Stones as it were, large chunks of hard rock balancing precipitously above the landscape:
The actor-network theory mentioned in one of MRCVE’s early dispatches... as a sort of template to compare Einstein’s relativity to the non-human actors in this said theory... a position an artist might well recognize and act upon. The Spitzbergen Seed bank as basis for the Dù Thuama /Doohma Post-office project, and with that the questioning of stones... and as chance would have it, just then Laetitia’s stones made themselves available during a small bazaar happening – and I thought: they have to travel. What better place to converge than at the KloLäuschen: petit pissoir as good as any Duchamp readymade... Surely Laetitia would agree.

Originally the gig at the Einstein (Opean8) was slated for the 4th of July, revolutionary holiday for a once great nation-state now seemingly in free-fall... But which is still influential enough to drag Europe down with it, succumbing to the same sort of bigoted short-sighted popularism as denoted state-side. What better place to investigate this phenomenon than in a town that has the sad pedigree of being the birthplace of the nationalist-Socialist experiment of the 30’s and 40’s we just alluded to. For this I had discovered a Cameo:

Queen Elizabeth of Belgium side by side with the illustrious Einstein during his brief stay as a passing refugee in Belgium... they shared a penchant for the violin... She was in fact to become best known as the patron of one of the most prestigious international violin concours, while the fact that she was a Bavarian-born Wittelsbacher was much downplayed after the war. This seemingly chance encounter has also to do with Laetitia’s stones, as well as the stories surrounding the Island of Roses in the Starnberger See, the cross now standing knee deep in the water where Ludwig II drowned... and by proxy all the strange happenings that conspired to end many a life on the shore of a pristine picture-postcard lake in Bavaria, such as the Hotel Hanselbauer (Lederer) across lake Tegernsee from the Wittelsbacher Schloss... all within sight of the same hills painted by the first abstractionists around Kandinsky...
Heady stuff when one considers that Duchamp dumped painting alltogether in Munich at the same time (1912, abstraction emerging just a year before) as Kandinsky published his “Über das Geistige in der Kunst” and Karl Valentin was on his way out. Benjamin Franklin Wedekind on the other hand was just enjoying some successful notoriety when he was whisked away in 1918... Simplicissimus and his cabaret work reign still... at the Gulbranson Museum in Tegernsee...

Speaking of traces, a certain amount of serendipity was involved when researching the history of the Pavillon im Alten Botanischen Garten, the only remnant of what was once a sumptuous ‘crystal palace’ as was the vogue at the time- burnt down as did many of the glass houses built to display modern technologies and colonial enterprise... they got Speer to construct it’s replacement ‘Haus der Kunst’ where Wiels-director Snauwaert wielded power not so long ago... but what I found interesting was that this remnant reemerged from the ashes was the haunt of a group of artists at the cradle of the artist-run movement, SPUR, which for a time were also the representatives of the Situationist International... until Debord threw them out with the rest in 62... and then the main instigator turned his attention to the creation of the Valentin-museum in the Isartor... so that fits in nicely with the dadaistic round trip... leading us parading back with the gaggle of invalids proclaiming that ‘Behinderung ist Rebellion’ ...

All this with the backdrop of the Messianic Research Center for Visual Ethics slaving away in the heat of their ovens at their temporary Frankenstein-bakery attempting to create a sort of doughboy-Golem “it’s alive!” as part of their investigation of the inanimate imbued with the power of life,- yes, so far as to animate us humans to participate in this cutting-edge research straddling the arts & sciences in a way hitherto unknown to... well anyone I should say...

So, seeing the “Opean” gig had been bumped one day along I thought it opportune to present out banquet as a ‘day after’ sort of scene: a very late hangover breakfast (Katerfrühstück) in which the remnant of that revolutionary day before smell sour and the tempers are frayed even before the first guest arrives... The American dream gone trump, the only thing that can save our social coherence (let alone cohesion) is the promise of a new man such as the MRCVE are preparing... a joint venture perhaps, a European collaboration...

Depending on the results we can already consider further future expansion into unknown realms, new and exciting places, using new and astonishing tools and methods... all developed at this very colorful (färberei) site during this (first) colloquial meeting, 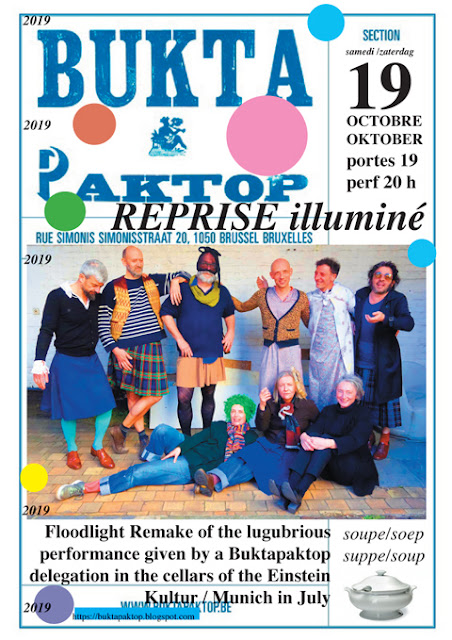